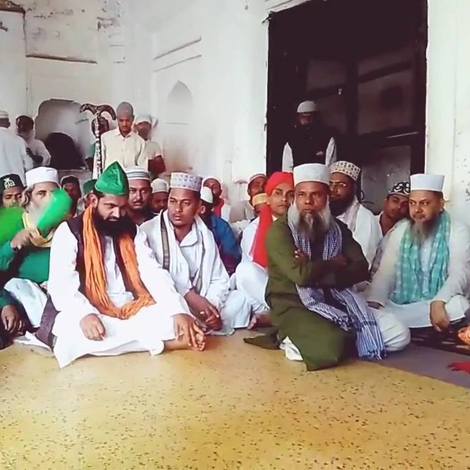 The name Qawwali comes from the Arabic term Qa'ol, which is an axiom or dictum based on religious issues that aid in the purification of the mind. A musician or vocalist who sings the hymns or praises of God and dictums of the prophets, saints, and other holy personages in Arabic, Persian, Urdu, and even Hindustani authored by known Sufi saints and poets is referred to as a Qawwali. These Qawwali performances are very attractive in nature, touching the delicate thread of the human heart, which is the major center of spiritual awakening in man due to its ethereal nature. The Khawaja Sahib not only initiated but also supported these concerts in order to captivate and shape the hearts of his listeners in order for them to gladly embrace the Divine Message.

Qualification of a Perfect Qawwali Singer.

While the devotional songs sung at Hindu shrines are usually created in Sanskrit, Hindi, or other Indian regional languages, the Qawwali mehfils' compositions are usually a selection of inspiring religious poetry in Persian written by several renowned Sufi poets and dervishes. The charm of such Qawwali concerts has proved remarkably persuasive in softening and capturing a human heart containing even the tiniest spark of piety and devotion. They have a hypnotic effect on spiritually inclined audiences, inducing an irrepressible jazba (strong sensation) that leads to wajd (ecstasy).

Since time immemorial, music has played an essential role in India's religious and social life, and singing or recital of devotional songs known as bhajans, for example, has been one of the most significant ceremonials in Hindu temples and religious assemblies. The intriguing mixing of lovely melodies in Sufistic style spreading the message of Truth was invented by the Khawaja Sahib. This medium fitted Indian culture, temperament, customs, and traditions well, resulting in his Sama or Qawwali mehfils (congregations) becoming extremely popular with excellent outcomes, and they remain so till today

On one hand, a flawless Qawwal is a master of traditional Indian music with a pleasant and captivating voice, and on the other, he or she is well-versed in a wide range of selected poetical works on Sufism by illustrious Persian, Urdu, and Hindi poets. A very good Qawwal still requires the "spiritual blessings" of any great Sufi saint for final excellence and wide recognition, in addition to many years of rigorous practice compatible with the various understanding of the stated poetry. There are several examples of exceptional Qawwals who have risen to fame and prosperity in India thanks to the graces of one or more Sufi saints.